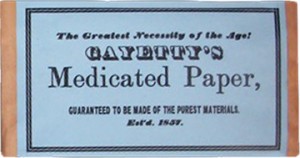 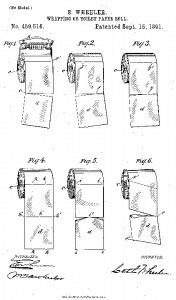 “My invention consists of a roll of paper for wrapping or toilet use so constructed that the points of attachment and severance between the sheets will be alternately out of parallel lines running through the whole body of the sheets, so that a pull upon the free end of the web will not be transmitted in a direct line through a series of sheets,but will be di- Verted by the spaces opposite the connecting points of the sheet pulled upon, thereby producing a transverse strain upon the next line of connecting points sufficient to break them. In carrying out my invention the sheets of paper are only partially separated, having their points of attachment arranged in a novel n’anner, whereby each sheet will easily separate’from the series as it is drawn from the roll, there being no litter occasioned, and any waste of paper is thereby prevented”.